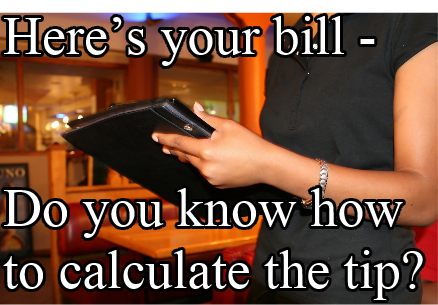 How to Calculate Tips

This is a “life hack” you want to get good at.?? You don’t want to have to pull out a calculator app, and you don’t want to undertip or overtip because you are in a hurry and can’t figure it out.? This is doable, and is very simple math if you know the tricks.

Just the other day I was in a restaurant and when leaving the person I was with said: “Hey, I just realized that I didn’t add enough tip when I paid with my card!”? I asked what the total bill was and what she had paid, quickly figured it out in my head and gave her the cash to make up the difference, so she went back in and gave the waitress the amount that was going to fix things.? I’m sure she was happy about that.? Plus, everyone was getting into their cars, the restaurant was crowded, people were waiting to take our parking spaces..you get the idea.? This kind of stuff happens all the time.

Here’s the synopsis, then I’ll explain:

When in doubt, round up to the next half dollar, or even better, next even dollar.

The main trick, and the one that gives you the starting point, is to move the decimal point over one place.? This works with ANY bill, any number.

Examples of bills you may get, moving the decimal point over:

Of course it is easiest if the amount involved is a very simple number, such as a bill of $10. We’ll take that as a starting point and show you how it is easy to also calculate with more complicated, odd numbers that also have cents in the value.

Okay let’s take the bill of $10. If you want to figure out 10% of anything then all you do is move the decimal point to the left one place. So for $10 you have this:

So the trick with the figuring out the tip of 15% is to move the decimal place over one and that gives you 10%, and then think of what is half of the 10% to give you the 5%.

Then add the two together and you get the 15%.
Or to put it another way😕 get your 10% – simple, right?
Cut your 10% in half, in your head.? This is easy to do because dividing by 2 is the easiest division you can do.

This sounds harder than it actually is, so let’s do an example.

Okay if we move the decimal place over to the left one place and we have:? $.627

That might look confusing-what you actually have is 62.7 cents. Let’s rounded up to $.63

Okay, so what is half of six? Three. We can get picky and look at what is half of three cents and come up with 1.5 cents, but that is kind of ridiculous – let’s call it two cents.

So what we have is

Of course that is a silly and overly-picky? example because at $.95, you will just want to leave a dollar tip.? However, some people LOVE to get picky with math, so that’s why all the details are included here.

Okay now we know what 10% is and we need to calculate the extra 5% in our head.

Just so you know, calculating a 20% tip is actually a lot easier but we will get that in just a little bit.

Move the decimal point over one place and you have $1.234

From here forward we’re going to forget about the percentages of 1 cent.

So then you have

I’m trying to do this ‘precisely on paper’ so to speak, but if I was calculating this quickly in a social situation and the bill was $44.50 then I would just think:

Okay let’s do the 20% tip calculations-they are easier and your server likes it better too.

All you have to do is take any amount, move the decimal point to the left one place, and then double it.

You want to be able to quickly calculate tips in your head, both for your servers sake and also because you won’t look chintzy, sitting there doing calculations at the table.
First step:? move the decimal place over – now you have 10%.
2nd step:? for a 15% tip, cut that number in half and add it to the 10% – you are done

When in doubt, round up to the next dollar.

FUN ASSIGNMENT:
Grab a few actual receipts out of your wallet, look at the amounts.? Or just make up some numbers.
Move the decimal place over for your 10%.? Now cut it in half for your additional 5%, or double it for your 20% tip.
Since you know your simple times tables and simple addition and subtraction, along with the trick of getting quickly to the 10% to work with, you can do two or three of these practice tip calculations easily now, right?? Try it!

Knowing how to calculate tips easily is now part of you being the suave and debonair person that you are. ;-)? Let me know how it works for you!