It looks like the Golden Age of edited books is over.? I grew up reading books published by major publishing houses because that was all that was available, and now I read lots of books on the Kindle.

Really I had no idea what a difference editing makes.? All major book publishers, if you are lucky enough to be published through them, make your book go through an editing process before the book is published.

Now, writers can publish their work directly on the Kindle and other platforms, and quite obviously a big percentage of them do not have their books proofread or edited – and it certainly shows. 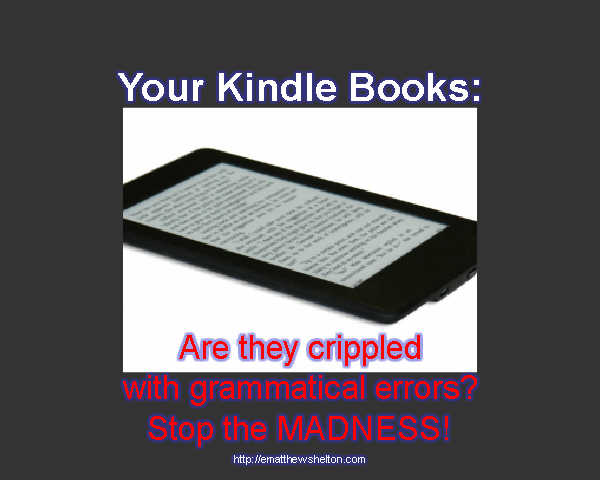 But of course because it is there book they have allot to say about it one way or another, and they can except or reject how their riding is present to the world.

Ok, the sentence above was a test, with lots of things wrong with it
– how many did you catch?

Or using “there” when it should be “their.”? Or “except” instead of “accept.”

Or other kind of mistakes that spell checkers can’t catch, like “riding” instead of “writing.”

I’m not trying to come across as a school-marm librarian grammarian because, first of all, I’m sure I make mistakes too, but I try really hard not to.? I go over stuff more than once to try to catch mistakes, because I think it makes a difference.

How could eliminating these kind of mistakes make a difference with your Kindle books?

I don’t know how many times I’ve been reading something on the Kindle that I’m really into a story and thinking that the author really knows what they are doing, and all of a sudden there is a grammatical error or a spelling error, and it breaks the spell of the book.

These kind of errors show the authors’ feet of clay – you don’t think they are so great any more.

I start looking for more errors, and my expectations are considerably lowered for the rest of the book, if I choose to continue reading it despite the errors.

Some of the things I’ve read are really good writing, and I’ve thought about sending a list of the errors to the author, but I wonder if I’d be making an enemy instead of a friend by doing that.? And of course some of my corrections may be debatable – another reason to have a professional do it in the first place.

I write with a lot of hyphens and colons and incomplete sentences.? More often than not, it do it intentionally, as a stylistic thing.

I’m not sure whether to put the period of a sentence before or after the quotation marks.? There’s lots I don’t know about grammar and writing grammatically.? But if it is more than a blog post, I am going to try to get rid of as many errors as possible before it gets out there, because there’s lots of Amazon reviewers that will rip you to shreds and give you one and two star reviews if you don’t.

There’s no shame in getting your books edited and proofread.? All the best writers have it done.

Mark Twain’s wife edited all his work and removed all the cuss words.? Personally I would love to read Mark Twain in the uncut, spicier version, but there is absolutely no doubt that his books sold immeasurably better because of her editing.? “Bad” language is pretty much acceptable now, but it wasn’t back then.

But bad grammar and bad spelling and sentences that make no sense will never come into fashion – mistakes like these will only hurt your sales.

So go ahead and rip me up with all the mistakes I made with this blog post – I’ll look forward to it.

← Meme Image Creation with Over: Text Up Your Images | iPad.AppStorm
Does Authentic Content Matter? →