What is That All About – doing more than you are getting paid to do??? And – should I do it or not? 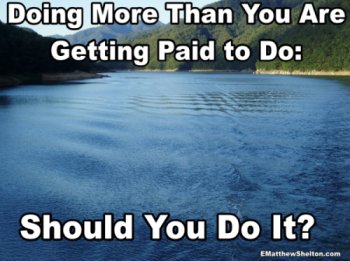 Here’s the basic principles and building blocks involved in this whole question and issue:

Here’s the reality of it, from an Employers’ standpoint

When a company hires you to work for them, to ?have a job? with them, what they are hoping is that the actions you perform for that company will come out in the plus column, that what you do will be worth even more than what they are paying you.

If they were thinking that the actions you perform would just come out neutrally (certainly not negatively) then they would not have hired you.

They want your actions in your role with that company to come out positively, hopefully in the ?Wow that person was really a great hire!? category. Otherwise, it is not worth the risk of adding another wild-card factor, another person, to the daily running of that company.

So, that’s what the company’s attitude is toward you ? they are hoping that you as a hire will turn out to be in the wildly-positive column in terms of assets for that company.

Now on the other side of the coin is what you perceive of what ?You are getting paid to do?

– what is that all about?

From the company’s perspective, they are wanting performance out of you:

They are wanting what you ?are getting paid for? and/or ?getting paid to do?, to be a lot, possibly more than you realized when you agreed to work for the company, when you ?took? the ?job.?

Now, is that being exploited? Is that being taken advantage of, for a company to expect a lot out of you?

As beings, or beings of energy, we are either growing and moving forward in our lives and what we have the capacity to do, or we are moving backwards. There is no stagnating and staying in one place ? energetically it just doesn’t work that way for a living, thinking, breathing and interacting being such as yourself, or anyone else. Physics, once again.

So the ?job? is part of your life. Within that job, your actions, your capacities, your roles, your skills are all either moving forward or moving backwards. One or the other.

That ?moving backward or moving forward? thing is the most important thing to watch out for and pay attention to when you are at the job, or on the job, or doing the job, whatever you want to call it.

This is a major part of your life!

The answer to this question can have a major impact on your life, now and for quite a while forward.

So what should I do?

Let’s look at the list energetically, from the viewpoint of the wholeness of life.

If I choose A, what will I be accomplishing, for myself and for the company?

Personally I won’t be moving forward, either skills-wise, money-wise, career-wise, or attitudinally if I choose A.

A lot of people would say ?Choose A, because that way you won’t be being exploited!? but they are wrong. By choosing A in a job I am cheating yourself and everyone else. I am moving backwards.

Let’s move on to the other choices so this will become clearer.

If I choose B, I am choosing the route of looking competent.

With B, I am looking like I know what I am doing, as I am doing the job, fulfilling the role I was hired for. But am I moving forward as a person?

As people, we are either moving forward or backward. If I choose B, I am still basically treading water, going nowhere. I might be improving my skills a little bit, on an efficiency level, but that’s about it.

Doesn’t sound very exciting, does it? The company won’t be excited, either.

If I choose C, what is happening? A lot of people would choose C.

Think about it: You are moving forward with what you can do, you are improving, you are growing.

Your ?job? is securer because management likes what you are doing so much. Yes, you are doing more than what you were hired to do, but it feels like the right thing to do. You might come home tired, and sometimes you wonder ?What is it all for?? but you aren’t feeling like you are cheating yourself or the company you work for.

You feel like there’s a place for you in the world, and that you are ?going places,? too.

But I won’t choose C

I choose to do so much that people say ?Wow!!?

It is a matter of providing value ? for yourself, for your company, for the World, for the time you have left in your life

Your precious, totally improbable life. Where is it going, how are you spending it?
Are you going all-out, are you saying YES??

These are things I am asking myself.
I am learning to say ?Yes? at a whole new level, and it is wonderful.

What happened today is a perfect example. I was given a paycheck late in the afternoon, the first job-type paycheck I’d received in several decades. And honestly I was not pleased. I was a bit angry with what I was seeing on the check.

Luckily however, right after that, I began working on a promotional project for the company, one that was trying to bring to life one of my crazy ideas.

Like most everything else in life, it was turning out to be more work to do it and to take longer to do it than I thought it would, but there was another guy I recruited at the company to work on it with me who, the more he worked on the project, the more enthusiastic he got about it.

This was a guy who’d been working for the company for awhile, and it seemed to me that he was under-appreciated – a real diamond in the rough . I’d been encouraging him, but when he started working on this project, he started to shine.

By the time we got done that day, he said ?This is the most fun I’ve ever had at this company.?

That warms my heart just to bring it up again.

Another thing that happened that day was that I was reluctant to tell the office manager-type guy about this project was we were doing, but the fellow I was working with did, while I was standing there in the office feeling mildly being embarrassed about it.

Then the manager guy said exactly the right thing, something along the lines of: ?That’s what we hired you for, the cringe-factor, to do things that make you cringe as you are doing them.?

I’m laughing a little bit remembering that, because it’s true. I’m doing things where I’m just about thinking: ?Is this something I’d ever expected to do when I grow up??

On the edge of learning, on the edge of being and growing and discovering and learning and of becoming more. In my current job, making crazy promotional videos was nowhere in the job description

That’s what it’s all about. Choose D or ?level 4? or whatever you want to call it.

Say yes ? give an improbable amount

And you know what? You will be giving to yourself just as much as you are to your company and job – if not more, much more.

By giving a wow amount, you are becoming a ?Wow!? person, a person that other companies would fight to hire and that your company would fight to keep.

And by doing that ?wow? amount, things won’t stay the same, believe me.

Things will get better, either salary-wise, or career-wise, or both.

And no matter what happens in terms of pay, there is, beyond the shadow of a doubt, a huge pay-out for you, personally, by saying YES and going the WOW route. You’ll only find it by doing it.

I really hope you do – start doing more than you are getting paid to do – a lot more. And I’d love to hear about your wow adventures too.