Please note: I am not a grammarian/librarian type, pouncing on errors all the time – there are just some spellchecker errors/spellchecker fails that either will cost you sales or else cause you embarrassment, or both.? Read on for proof of this.

When you are putting out content, whether it is for your website or for something higher level such as a Kindle book, please be aware that even using a spellchecker (such as is built-in with Word) won’t save you from embarrassing mistakes – aka spellchecker fails.

A well-known article writer posted on Facebook yesterday how she almost put out some content that had the word “pubic” in it instead of the word “public”.? The phrase was “meeting in pubic places.”? Needless to say, this would have been tremendously embarrassing to put out on the web – but no spellchecker caught it, only proofreading. 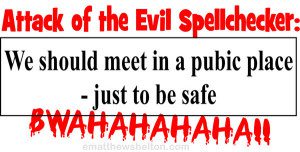 Here’s another example from a Kindle ebook
I read recently:

The ebook actually starts out, first thing, with this mistake (another one that spellcheckers won’t catch) and I believe I counted four other times in the same ebook that this particular mistake is repeated.

This one is particularly bad because, without a doubt, the author is losing sales because of this spellchecker error.? How can I be so sure about that?? Because the error is in the very first sentence of the ebook and shows up first thing in the “Look Inside” feature on Amazon!

The mistake in this case is using the word “trough”
instead of the word “through”.

And, just in case you are perhaps a person who has always made this mistake and are not sure of the pronunciation of the words, here’s the results from an online dictionary:

define: trough
trough
/tr?f/
Noun
A long, narrow open container for animals to eat or drink out of: “a water trough”.
A container of a similar shape used for a purpose such as growing plants or mixing chemicals.

define: through
through
/THroo/
Preposition
Moving in one side and out of the other side of (an opening, channel, or location): “stepping through the doorway”.
Adjective
(of a means of public transportation or a ticket) Continuing or valid to the final destination: “a through train from Boston”.

I am writing this in Word right now, and it gives me automatic little squigglies for words that aren’t in its dictionary, such as the word “squigglies.”

Here’s a screenshot of what that looks like on my screen:

Ok, fine, “squigglies” is kind-of a made up word, but I like it, so I’m using it anyway.

But look at this – here’s two sentences, one above the other – one makes sense and one doesn’t:

Here’s a screenshot of those two sentences:

No spellchecker squigglies, right?? Here we thought we were safe since we were using spellchecker, but what you see above is a case of a sneak attack of the evil spellchecker!

Or here’s this one again: Just to be safe, since I don’t know you, we should meet in a pubic place.

So as you can see, the world is just not as safe as we thought it was – besides all the injustices and crimes of violence, there are things happening that we have to keep constant vigilance to fight it’s evil – such as spellchecker fails!